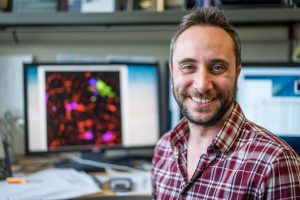 Professor Kim Green, Neurobiology and Behavior, has discovered a new use for the anti-cancer compound, pexidartinib.  Professor Green and his colleagues found that treatment with pexidartinib results in the elimination of the brain’s resident immune cells, which leads to the restoration of memory function.

Professor Green and colleagues treated Alzheimer’s disease model mice, which contain high levels of beta-amyloid, with the small-molecule inhibitor pexidartinib (or PLX3397). The inhibitor works by selectively blocking the signaling of the surface receptor colony-stimulating factor 1, which is found on microglial cells. Blockade of the receptor results in the death of microglial cells. In the healthy brain, microglia serve as the main form of immune defense. However, in diseases such as Alzheimer’s, microglia appear to be frozen in a dysfunctional state, which results in a chronic state of inflammation in the brain. Following a one-month treatment with PLX3397, treated mice showed a dramatic reduction of microglia within the brain. The effect of microglial reduction was a significant improvement in memory and cognition, and renewed growth of dendritic spines, all without any changes in beta-amyloid levels.

“Our findings demonstrate the critical role that inflammation plays in Alzheimer’s-related memory and cognitive losses,” said Green. “While we were successful in removing the elevated microglia resulting from beta-amyloid, further research is required to better understand the link among beta-amyloid, inflammation and neurodegeneration in Alzheimer’s.”