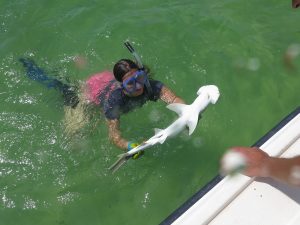 Samantha Leigh, a doctoral candidate with Ecology and Evolutionary Biology Professor Donovan P. German, is the first author of a fascinating new study about the bonnethead shark. Their research, published in the journal Proceedings of the Royal Society B, has identified the bonnethead as the first known omnivorous shark, i.e., one that obtains nutrients from eating both plants and meat.

Under a controlled experimental setting, bonnethead sharks were placed on a unique and chemically traceable diet. The research team found that the sharks do indeed digest the seagrass they consume, with around 50 percent efficiency. This efficiency is possible due to the sharks possessing the necessary gut enzymes for breaking down the plants.

“It was very surprising,” Leigh said of the results. “We have never seen a shark consume this seagrass, let alone one that’s able to digest it.”

Moving forward, the research team hopes to further explore how the consumption and digestion habits of these omnivorous sharks impact the local ecosystems where they live. New insights into the impact of the bonnetheads on seagrass levels could be important for modeling atmospheric carbon dioxide, and for U.S. coastal conservation efforts.