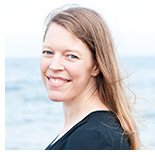 Professor Cascade J. Sorte (Ecology and Evolutionary Biology) has discovered that blue mussel populations have significantly declined over the past 40 years in one of the fastest warming regions in the ocean.  Blue mussel loss coincided with a shift in the composition of species within their habitats.  The results from Professor Sorte’s study may help guide future conservations efforts to protect the biodiversity of coastal systems.

Professor Sorte is interested in determining how higher global temperatures affect coastline communities.  Blue mussels are an important foundation species that provide food and shelter for other aquatic life in coastal systems.  In addition, they represent an important source of food and economic stimulus to people living near their ecological habitats.  Due to their importance as a foundation species and economic stimulus, blue mussels represent an ideal species to study the effects of climate change on aquatic biodiversity.  In the current study, Professor Sorte and her colleagues used historical data and contemporary survey data to evaluate changes in blue mussel population size and species diversity within their communities over a 40 year period.  They found that blue mussel populations have decreased over time, likely due to a combination of increased global temperatures and over harvesting.

The study’s results help to shed light on the complex effects of increased global temperature on biodiversity, as direct effects on one species, in this case blue mussels, can cause downstream disruptions in their local community, resulting in a loss of ecological biodiversity.  The full study can be found here.