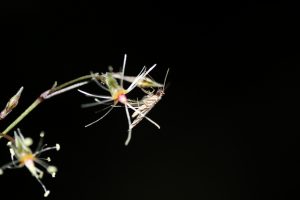 The native Hawaiian flora has the highest frequency of unique species anywhere in the world, but little is known about their interactions with other species, including potential pollinators of native plants.  In a study led by Ecology and Evolutionary Biology Professors Stephen G. Weller, Ann K. Sakai, and Diane R. Campbell, researchers have discovered that a moth new to science is a missing component to the evolutionary mystery surrounding speciation in Schiedea, the fifth largest plant lineage in the Hawaiian Islands.

Species of Schiedea have extraordinary variation in their reproductive systems, and colonization of new environments associated with a shift from insect to wind pollination has driven evolution of these modes of reproduction as well as speciation.  Sakai and Weller had speculated that many hermaphroditic species of Schiedea, which produce flowers with male and female structures, were adapted for insect pollination, but the nature of the pollinator was unknown.  Fortuitously, in an earlier study by coauthor Weisenberger, moths were attracted to a large experimental population of Schiedea kaalae, a species near extinction prior to her work.  Experiments reported in the current study have verified that this moth pollinates flowers of Schiedea kaalae, and supports the earlier hypothesis that the ancestors of this lineage were insect pollinated. The study further suggests that if rare plant species can be increased in numbers through conservation efforts, they may attract the pollinators essential for production of offspring.