Home Newsletter Exercise for the Brain: Is it Worth the Sweat? 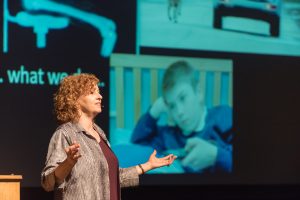 The 22nd Distinguished Lecture Series on Brain, Learning and Memory was held in the Barclay Theater on April 19th, and featured an excellent presentation by Professor Laura D. Baker of the Wake Forest School of Medicine. Professor Baker’s lecture, “Exercise for the Brain: Is it Worth the Sweat?” covered her groundbreaking work on the effect of regular aerobic exercise on the cognitive state of adults who are at high risk for cognitive decline and Alzheimer’s onset.

Professor Baker discussed her clinical study involving patients who have been diagnosed with mild cognitive impairment. The group consisted of seniors ranging from ages 55 to 89, who generally led a sedentary lifestyle. Professor Baker and her colleagues divided the patients into two groups. One group was assigned a low impact exercise routine for 60 minutes four times per week, and a second was assigned aerobic training for 60 minutes four times per week.  Both groups were followed for six months.  At the end of the study, Professor Baker found that those in the aerobic exercise group had beneficial changes in brain size and a decrease in the cerebral spinal fluid (CSF) levels of the tau, a protein whose levels are normally increased in CSF as Alzheimer’s progresses. Professor Baker described the results as promising, and noted that the results of her study were beyond what is often seen in other clinical trials testing pharmacological agents.

The Distinguished Lecture Series on Brain, Learning and Memory is a free public lecture sponsored by the Biological Sciences School, the Institute for Memory Impairments and Neurological Disorders (UCI MIND) and the Center for the Neurobiology of Learning and Memory (CNLM).