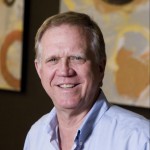 Professor David M. Gardiner is a regeneration biologist in the Department of Developmental and Cell Biology, and the Associate Dean for Academic Affairs for the Biological Sciences School. Professor Gardiner has spent his career at UCI working to identify the molecular signals necessary for limb regeneration.  His current work seeks to successfully regenerate complex tissues, including muscle and connective tissue. His lab utilizes techniques in cell biology, biochemistry and molecular biology to understand how cells communicate with one another to drive regeneration. He and his colleagues, including his spouse, Emeritus Professor Susan V. Bryant, have identified several key molecular signals over the years that regulate amphibian limb regeneration. They continue to work towards the day in which his findings translate to new treatments for human tissue repair and regeneration.

Professor Gardiner was recruited to UCI as a postdoctoral researcher in 1982. During that time, he began to work in the emerging field of regenerative medicine and is now focused on regenerative engineering. His early work was on cell to cell communication and pattern formation during limb regeneration, and targeted known cell signaling molecules. His successful work as a postdoctoral researcher later propelled him into a faculty position within the Department of Developmental and Cell Biology.

In addition to his tenure as a faculty member, Professor Gardiner has done substantial administrative work with the UCI. In 2014, Professor Gardiner was appointed to the newly created position of Associate Dean of Research and Academic Affairs. He worked closely with Dean LaFerla to expand the school’s research footprint. His efforts were successful and led to the creation of the new Associate Dean for Academic Affairs position.

While at UCI, Professor Gardiner has also been a dedicated teacher and mentor.  having mentored over a dozen graduate students and postdoctoral scholars over the years.

“Working with our students and trainees is the most rewarding part of this job,” began Professor Gardiner. “The big problems in science, like regeneration, will be solved by the efforts of many generations of motivated and talented researchers.”

When he isn’t working diligently on campus, Professor Gardiner enjoys spending time with his wife and their three children and two (with one on the way) grandchildren. He also enjoys golfing, hiking, and has recently picked up kite -boarding. Not all of his free time is spent outdoors, as he and Professor Bryant are working on a book on regeneration that is sure to be useful for students in the field for years to come.