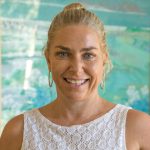 An expert physical organic chemist, Professor Celia W. Goulding (Molecular Biology and Biochemistry & Pharmaceutical Sciences) seeks to understand how bacteria function, particularly Mycobacterium tuberculosis; which causes tuberculosis, or TB. She has gained new insight into systems that help TB bacteria survive in those infected by obtaining iron from their blood. Professor Goulding has also been investigating a recently discovered behavior in which bacteria compete with each other for resources, known as contact-dependent growth inhibition. This type of behavior is utilized by some pathogenic (disease causing) bacteria, and Professor Goulding has identified many distinct proteins involved in the process. Both discoveries could have bearing on future antibiotic development.

Professor Goulding graduated with a B.S. in chemistry and mathematics from Kings College, London, where she also received a Ph.D. in physical organic chemistry.  She worked a post-doc at the University of Michigan and at UCLA. After making several significant discoveries about the TB bacterium at UCLA, she joined UCI as an assistant professor.

In addition to her research, Professor Goulding has dedicated a great deal of service to the university.  She has been a member of the Biological Sciences School’s awards committee, devotes much time to the School’s minority science programs and currently sits on the undergraduate cabinet for her department.  She has recently been appointed the vice-chair of Molecular Biology and Biochemistry and is exciting about helping advance its national rankings.

Professor Goulding loves to surf and spend time at the beach with her dog.  She has traveled to Central America for the sun and waves.  She also enjoys spending time with good friends and taking in art shows and movies.