Home News Brief In Rewarding Career, “My Best is Yet to Come” for Inaugural BioSci Ph.D. 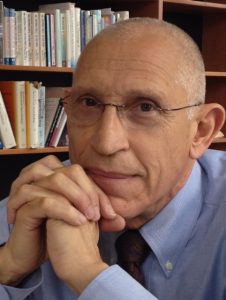 When the opportunity arose in 1965 for David Edwards to join the Ph.D. program in the School of Biological Sciences at UCI, then the University of California’s newest campus, he seized it without a second thought. Five decades after receiving his degree, he says his experience as one of BioSci’s first doctoral candidates was an excellent launching pad for a fulfilling career. In 2018, Dr. Edwards began his 51st year of teaching at Atlanta’s Emory University, where he is the Charles Howard Candler Professor of Behavioral Neuroscience.

While UCI had yet to hold its first classes, “I didn’t feel it was a risk to go because of the expertise there,” Dr. Edwards said. After the Seattle native received a B.A. in psychology from Oregon’s Reed College, he entered graduate school at UCLA and began working with psychobiologist Dr. Richard Whalen.  UCI department chair and renowned neurobiologist Dr. James McGaugh invited Dr. Whalen to join UCI BioSci’s psychobiology department, which has since been renamed the Department of Neurobiology and Behavior.  Dr. Edwards came with him, relocating the UCLA lab to UCI weeks before the school began its first-ever academic year. “The campus wasn’t finished so our first UCI laboratory was in a cinderblock building not far from the Orange County Airport, which is now John Wayne Airport.” He recalls the fledgeling campus as “surrounded by rolling hills and fields and in the middle of all that, there was a university.”  He added: “I enjoyed my time at UCI. It was a great adventure, exhilarating really, to be a part of this new one-of-a-kind graduate program.”

Dr. Edwards received his Ph.D. in 1968 and joined the psychology department at Emory in the fall of that year. Early in his career, he focused his research on hormones and social behavior in rats and mice. But for the past 20 years, he has studied how athletic competition affects hormone levels in humans. He was among the first to show that testosterone levels increase in women athletes as they warm up and continue to increase through to the end of competition.

He relishes his time in the classroom, saying “it’s one of the most satisfying aspects of my career” and his dedication has earned two Emory teaching awards. He teaches large-enrollment courses having to do with the connections between biology and behavior.  And with his life partner Dr. Mary Lerchen, a retired nurse practitioner and epidemiologist, he co-teaches a 15-person seminar on the psychology of love.  Among other things, students read about and discuss attachment styles, friendship, jealousy and limerence, a word coined in the 1970s by psychologist Dorothy Tennov to describe the intense experience of being head-over-heels-crazy in love.

Mid-career, Dr. Edwards found time to intensively study French. His proficiency in the language enabled him to teach and do research over a 10-year period during annual month-long postings at the University of Paris.

In his spare time, he enjoys reading, swimming, cooking, baking, and travel to favorite countries France, England, and Ireland.  Research and teaching remain central to his life. “The moment of scientific discovery never gets old,” he says. “And teaching continues to be a great pleasure. I think I’m still learning how to be a good teacher and my best is yet to come.”

The Tip of the Phage Biology Iceberg