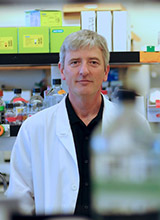 In a study recently published online in the Royal Society of Chemistry’s journal Lab on a Chip, Professor Hughes and his team successfully established multiple vascularized micro-organs (VMOs) on an industry standardized 96-well plate. The VMOs represent a microphysiological organ model system that has flow of a blood substitute through vascular and perivascular cells that can deliver nutrients to different types of tissues, such as heart or brain tissue. Professor Hughes’ team was also able to establish a functional vascularized microtumor (VMT) within the 96-well plate system, and demonstrated its potential for anti-cancer drug screening.