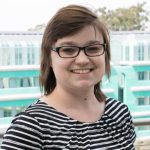 Living with type 1 diabetes has fueled fourth–year Developmental and Cell Biology major Tori Tucker’s goal: Defeating the disease that affects her sister as well as herself and is on the rise. After serving as an undergraduate researcher in the lab of Dr. Jonathan Lakey at the UCI School of Medicine, Tori will begin the Biological Sciences School’s Cellular Molecular Biosciences PhD program this fall.

Five million Americans are expected to have type 1 diabetes by 2050, compared to 1.25 million currently. Tori’s passion for fighting it began as a teenager who dreamed of conducting diabetes research. She discovered Dr. Lakey’s work while she was in high school and got in touch with him after she arrived at UCI. Three years later, Tori’s efforts and dedication led her to be listed first among authors of a published article – rare for an undergraduate – and the opportunity to present her work at several symposiums, including some hosted by the UCI Undergraduate Research Opportunities Program.

In addition to her academic and research commitments, Tori has been involved in a number of outreach initiatives. They include the ONE organization, which focuses on preventing extreme poverty and preventable disease, particularly in Africa; Peers Under Biological Sciences, a mentorship program for fellow Biological Sciences School students; and the College Diabetes Network. She is confident these organizations and her research have given her the training and skills needed to succeed at the graduate level in BioSci.

Tori offers this advice to other undergraduates: “Whether your dream is medical school or research, continue to pursue it and don’t allow anyone to stop you. Remain humble, because sometimes it’s important to just sit back and listen before asking questions. Remember also that while your grades matter, hands-on experience is equally important, if not more so. Go out there, do what you love and strive to be the best at it.”