Home News Brief Are You Drinking Too Much Caffeine? 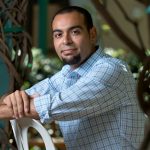 Professor Michael Yassa (Neurobiology and Behavior) is the director of the Center for the Neurobiology of Learning and Memory and an expert in the biology of the brain.  Professor Yassa has recently commented on the effects of caffeine on the brain in a feature on the overconsumption of coffee in Prevention Magazine.  While a common drink among Americans, there are potential harmful side effects to drinking too much coffee.

Several of the negative effects of coffee can be attributed to its role as a stimulant explained Professor Yassa. “Sympathetic nervous system activation can lead to anxiety, jitters, increased heart rate, irritability, and perhaps even anger outbursts,” says Yassa, about the downstream effects of excessive caffeine intake on the body.  “Switching to decaf helps, as it reduces, but doesn’t completely eliminate, the caffeine intake.” Yassa’s team has previously documented the positive effects of caffeine on memory and cognition. For more information, see http://yassalab.org or http://cnlm.uci.edu