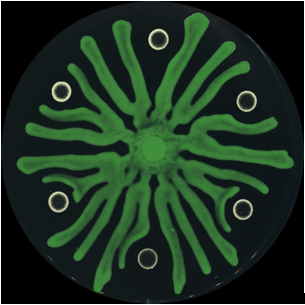 A team of researchers from UCI and the University of Copenhagen, Denmark has published a new study that describes a unique survival mechanism for the pathogenic bacterium Pseudomonas aeruginosa. Published in the Journal of Bacteriology, the team discovered that P. aeruginosa send out a warning signal when exposed to a bacterial virus or antibiotic. The warning signal stops swarming, which is the ability of bacteria to move collectively, in unexposed P. aeruginosa. The signal repels unexposed bacteria away from the danger so that the bacteria move around the exposed area to avoid it. The researchers postulate that this unique response to viral or antibiotic stressors could contribute to P. aeruginosa’s resilience against antibiotics in clinical settings.

“The system has the effect of communicating the presence of a danger to other bacteria in the population over relatively long distances. We were amazed at how effective the system is,” says Albert Siryaporn, co-lead author and Assistant Professor of Physics & Astronomy and Molecular Biology & Biochemistry at UCI.

The research team’s findings hold great significance for the future treatment of P. aeruginosa and other bacterial infections. P. aeruginosa can infect the blood and lungs and potentially lead to pneumonia. The bacteria can spread through contaminated surfaces, human contact, and soil and water, and is recognized by the World Health Organizations as a bacterium in critical need of new antibiotic treatments.

“This bacterium produces large quantities of the signal during lung infections. This suggests that the mechanism could have an important role in healthcare settings. We will be working on developing new strategies that could potentially combat this mechanism,” says Professor Siryaporn.