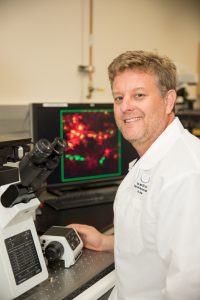 A few letters could spell out a major strategy for combating Alzheimer’s and other neurodegenerative diseases. They are iPSCs, short for induced pluripotent stem cells. Under the direction of Neurology and Behavior Professor Mathew Blurton-Jones, iPSCs offer an important tool for researchers seeking to prevent and cure these progressive and irreversible brain disorders.

First created in 2006, iPSCs are generated from adult non-stem cells and can be turned into any other type of cell. They enable scientists to study the effects of disease at the genetic level without using embryonic or fetal tissues. Professor Blurton-Jones is conducting iPSC studies in his role as head of the Induced Pluripotent Stem Cell Bank at the UCI Alzheimer’s Disease Research Center. The UCI iPSC bank is the first in the nation to generate iPSCs derived solely from age-matched individuals, some living with Alzheimer’s and others whose cognition is normal.

His goal as chief of the research bank is to establish a repository of human iPSCs to serve as models for neurodegenerative disorders. Professor Blurton-Jones has made significant progress in this capacity, creating dozens of iPSC lines from multiple patients with diverse genetic backgrounds. UCI researchers can model diseases by using these iPSCs, and even test drugs on the cells to determine which of the pharmaceuticals should move into preclinical trials. The research bank is already having a strong impact on the field, sending cells to investigators across the US and in many other countries.

Professor Blurton-Jones has also used iPSCs in his own work, focusing on cells known as microglia. In addition to helping develop and defend the brain, they have a role in Alzheimer’s disease and many other neurological disorders. Microglia are difficult to obtain from human fetal or adult brain tissue, which has presented a challenge for researchers working on those diseases.